Create an Account - Increase your productivity, customize your experience, and engage in information you care about.

It’s back: Globe Chamomile a ‘pretty’ invasive and combustible threat for Cave Creek

CAVE CREEK – Although the rain has been a welcomed sight in the Town of Cave Creek this winter, unfortunately the added precipitation also brings fire threats in the form of a small, yellow flower known as Globe Chamomile.

Globe Chamomile, which is an invasive weed, is also referred to as Stinknet because of the vile smell that emanates from its lacey leaves and causes severe allergy problems. Regrettably, the smell is not the only problem with this weed.

Because Globe Chamomile is so prolific, in the last few years it has infested the regional area, and this “cute” flower has taken over yards, parks, medians, open desert spaces, and any other inch of soil it can lay root in. The blanket of yellow will eventually dry out with the warm weather, leaving behind an abundant fire fuel in its place.

The Town has already been taking a proactive approach to controlling the spread of Globe Chamomile reducing fire risks by applying pre-emergent near Town guardrails and in medians. The pre-emergent stops the plant’s seed from germinating, preventing it from blooming and spreading the hundreds of seeds present in each flower; which proliferates the infestation.

The Cave Creek’s Public Works Department is working diligently to use the pre-emergent before the invasive weed and fire hazard blooms, and is currently in the process of applying it to the medians on Carefree Highway and Cave Creek Road. Additionally, Schoolhouse, Spur Cross, Fleming Springs, and Highland roads, as well as Galloway Drive and 32nd Street’s shoulders are slated to be treated next.

The Town has seen success in using pre-emergents as a way to prevent the blooming and spread of Globe Chamomile, and the method has become more effective as it is applied regularly year after year.

The Town of Cave Creek is urging residents to be proactive in managing this invasive weed from their properties, helping reduce the fire risks in Town by using a pre-emergent to stop it from blooming and spreading.

A preemergent is your best friend in dealing with weeds as they do not typically kill established, native plants, but rather it stops seeds from germinating. There are many different types and brands of pre-emergents, and it is best for residents to speak with their landscapers or pest control professionals about the best option for their property.

However, in general Simazine or Pendimethalin are some of the best options for natural desert landscape. It is important to apply the pre-emergent now, or as soon as possible before the Globe Chamomile blooms.

You can put pre-emergent down anytime of the year, but the key to achieving the best results is to ensure that it is properly watered in, or apply it 24-hours before at least an inch of rain occurs. The effectiveness of the pre-emergent lasts approximately six months and should be applied to properties two to three times a year.

For residents who are unable to stop Globe Chamomile from blooming and spreading on their properties this spring, it is recommended that people manually remove the weed by mowing it down or pulling it to reduce fire risks this season.

There are chemical options such as Ground Clear that can kill Globe Chamomile once it has bloomed, but it must be applied away from plants, and its best to speak with a landscaping professional first before using. 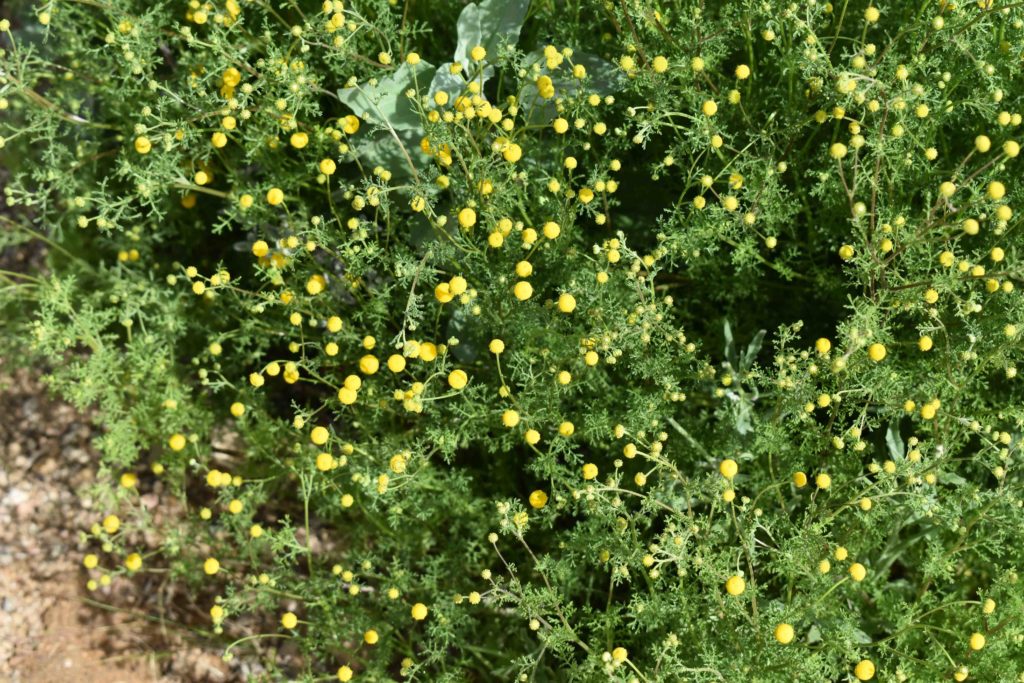